Hamburg, February 2020 – A look at current sales figures and growth projections quickly reveals the importance of plant-based alternatives to meat and dairy products. “The plant-based revolution” is not just one of this year’s top trends according to Innova Market Insights, it’s also a rapidly expanding category in food retail. Worldwide, the market for plant-based products is showing double-digit growth. However, consumer expectations are rising commensurately. In addition to flavour, texture and indulgence, a short ingredients list is also increasingly important, as is the absence of soy and other allergenic ingredients. Accordingly, Hydrosol has long been using other plant protein sources instead of soy.

Meat alternatives with peas, potatoes or fava beans
“Due to the GMO issue and its allergenic potential the demand for soy in Europe is declining sharply,” says Florian Bark, Product Manager at Hydrosol. “In its place, protein sources like peas, potatoes and fava beans are coming to the fore, along with newer sources like chickpeas, sunflower and algae. For example, we use these proteins in our plant-based meat and sausage alternatives.” Allergen- and soy-free stabilising and texturing systems based on potato and pea protein can be used to make a wide range of products, from cold cuts to salami to bacon. 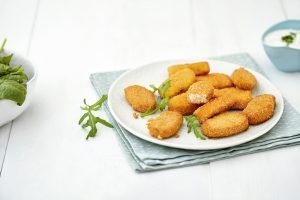 Plant-based alternatives to dairy products – mostly soy-free
For a long time now Hydrosol has been using mostly soy-free stabilising and texturing systems for the broad spectrum of plant alternatives to dairy products. Successful examples include desserts based on almond and coconut drinks. A functional system of modified starch, hydrocolloids and plant fibre lets manufacturers make a tasty pudding, and can also be used to make fermented desserts. In the milk drink category, sunflower and oat alternatives are possible. 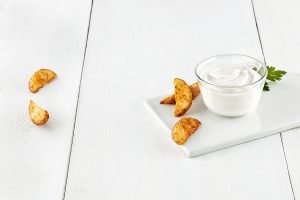 A new item in the portfolio is a plant alternative to sour cream that cannot be told from the original – and is just as versatile. This plant-based sour cream is free of e-numbers, as well as being entirely soy-free. At FI Europe in Paris Hydrosol staged the product in a memorably way. Together with sister company Deutsche Back it developed a soy- and gluten-free vegan tarte flambée, with gluten-free crust, plant-based sour cream and vegan bacon. “The tarte flambée was a great success, and many visitors were immediately won over by the taste of our sour cream,” reports Product Manager Katharina Schäfer.

New generation of plant-based foods – without soy or wheat!
https://hydrosol.de/en/news/neue-generation-pflanzlicher-lebensmittel-verzicht-auf-soja-und-weizen/